The Algorithmic Warfare Cross-Functional Team (AWCFT) is a fast-moving effort launched in April 2017 by the U.S. Deputy Defense Secretary to accelerate the Department of Defense’s integration of big data, artificial intelligence, and machine learning. Also known as Project MAVEN, the AWCFT’s first task involved the development and integration of computer vision algorithms needed to augment and assist military and civilian analysts that are heavily encumbered by the sheer volume of Full-Motion Video (FMV) data the DoD collects. While the AWCFT’s work against the FMV problem is ongoing, progress has been encouraging, and the AWCFT is now preparing to partner with industry to integrate big data and machine learning against other challenging problem sets across the Defense Intelligence Enterprise.

Here is the AWCFT and Project Marven’s Memorandum signed by the Deputy Secretary of Defense Robert Works on April 26, 2017

In Project Maven Phase II, the AWCFT will continue to aggressively pursue its objective of turning the enormous volume of data available to the DoD into actionable intelligence and insights at speed. The U.S. Army Research Laboratory (ARL) and the Algorithmic Warfare Cross Functional Team (AWCFT) have hosted an Industry day at Silver Spring, MD on Oct. 24 2017.

SitScape team has been selected to present on-stage to the expert audience on SitScape’s agile analytics and automation capability on Machine Learning and AI in a drag-and-drop and plug-and-play platform, and was very well received. 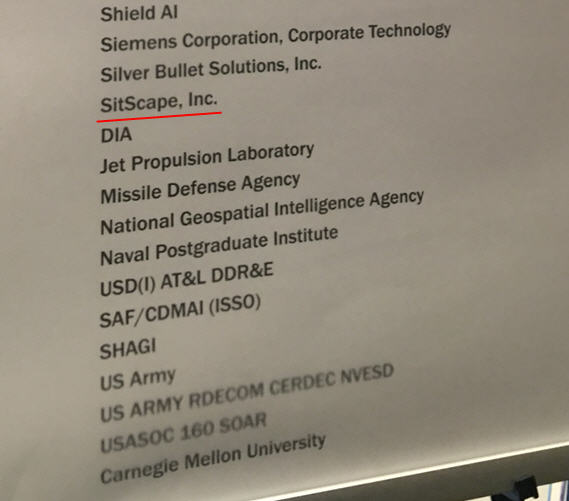